The Basics of Fusion
in Giant Woman 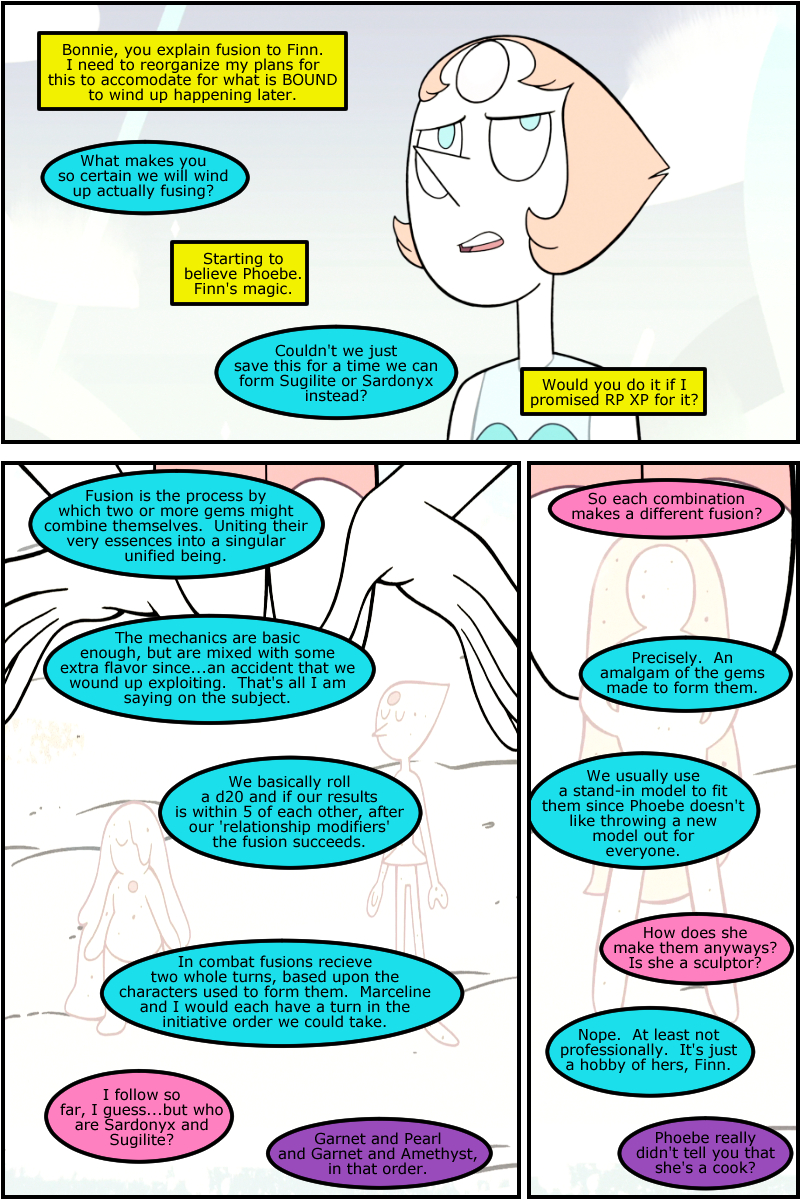 These are pretty much the best I could come up with to explain how a fusion might function within gameplay. Let's hear how everyone else would try and run 'fusion'.

Double Friday - Next page will be uploaded this afternoon.

This is a parody, and is not endorsed by Cartoon Network, or the people who make Steven Universe. This is purely for fun.

Hmm, maybe instead of having 2 independent turns, 1 for each one, have both turns be from the fusion, and that both players have to note pass their action to the GM, so the GM interprets how those 2 orders would mesh (So having to similar actions make the action work, and 2 different ones has a chance of breaking the fusion)

This is actually really smart. Good idea. Kinda like with alliances in Diplomacy. Bad coordination means armies bounce off

"I'll give you XP for it"
Pearl begins explaining immediately, probably before she finished saying the Bribe.

~+[The Following was made primarily for 3.5 and Pathfinders]+~
As for Fusion... As a Unashamed DBZ Fanboy until the day i die, I've put Ample thought into Fusion long before Steven Universe was a Show.

Theres a few Idea's I've come up with, of various levels of Overpowered depending on the system, but what would be the Point if it was NOT a game Changer?

The First, More detailed, and preferred by me way would be to "Gestalt" their Classes together, as if the new "Fusion" Character had, assuming the Fusers were a Fighter and a Sorcerer, has taken both classes as the same time, having both level 1 fighter and Sorcerer goodies at level 1.

After that, their Base Attributes are looked at, then you'd pick at random which to make the "Base", then you take the Otherone, and remove the Pre-Pointbuy Default(usually 8 or 10 depending on system) and add the Remainder to the Base.

If they were both Melee characters, you can imagine they would likely have immense Strength or constitution, which could get a little out of hand... even worse if they were both Wizards with int of AT LEAST 20.

But the Story of the 34 Int Wizard can wait till another time.

Equipment-wise, their gear would be Fused Aswell for as long as they still have it equipped, and would benefit from both sets of Equipment(In the case of Arcane Casters, the Armor Class Penalty is waived for the sake of Rule of Cool).

For Actual Actions, they would share a Move Phase and Intiative, which the players must Agree On, but they both get a standard, Bonus and Reaction Action.

With Steven Universe rules in Mind, the Fusions would likely have Multiple Arms, and thus wield each of their Weapons separately, or in a Fused state, and function as if they had the Duel-wielding feats as necessary, I would waive any real penalty, as with Four(or more) arms, they should have no real problem finding a way to appropriately wield their weapons, tho some combinations might be humerusly awkward.

For the ACT of fusing, honestly, my Synchronization rolls are not unlike what you said in the Comic, tho here would be a Harmony roll that will be made with the Combined Dice Pool, to Determine Duration, which is Usually the Fusions Level+Combined Wisdom, with a Penalty for the Distance in their Alignments... however, i usually just flat out make Alignments not even a thing in my settings so these rules are kind of Vague at best... Two good has a +1 or +2 bonus, a Good and a Neutral would have no modifier, while a Good-Evil would have a -1 or -2 for being fundamentally incompatible. I've never figured out Law-Order, but its probably the save... a LG and a CE would suffer a -2 to -4 penalty.

Again, going back to the Steven Universe Variant, I would say add a multiplicative -1 to the Harmony Total for each additional Member of the fusion, as maintaining synchronization and harmony becomes harder and harder the more Variables you add... it'd be -1 for one extra person, -2 for the next for a total of -3, -4 for the next for a total of -7... tho with the right custom Feats, this restriction could be reduced.

I would also make Available Feats to make Fusing easier and to elongate Fusion duration... Normally, i make Players wait a Hour before they can fuse again while their Essence "settles".

OH, Total HP would be Combined, as would Spells per Day, Ki, or any other such thing.

I had another method, but remembering this one kind of buried it.

Like i said at the Beginning, if it was not a Game Changer, there would be no Point...

Still, even with a Character such as this, a fused group of 5 would still have sincere difficulty fighting a Dragon(If Dragon is played Correctly, Is of appropriate age, and one or more of the Fuzees are not a royal munchkin), which is what i usually gauge "Is it OP?" too.

And they would likely have like... 3-5 turns to do whatever plan they had came up with regardless.

Anyone reading this is welcome to Use/Adopt/Steal it, anyone could come up with this if they cared too, really.

This is before Mods given by Stats, of course.

Wow that was ALOT of text...

I wouldn't even try to cover fusion in dnd 3.5. Way to much to keep track of. If I had to, I'd abstract it down a lot which doesn't fit that well with dnd. If I had to model it in an rpg system I'd probably use something less strict and easier to freeform, like mage the ascenscion. Much easier to just wing stuff in that system which is very... very... VERY appreciated with something like fusion.